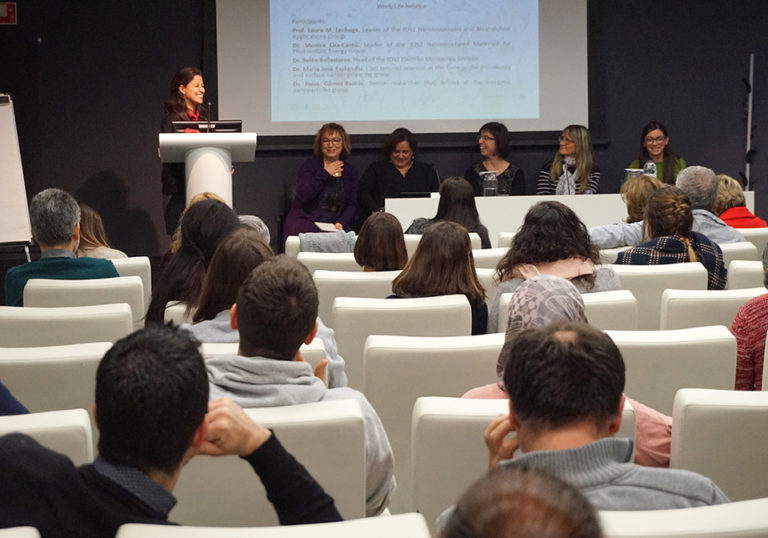 Last week we celebrated the International Day of Women and Girls in Science at the ICN2 with a series of events intended to inform and provoke reflection on the subject of gender. Read on for a summary of the main ideas raised.

The International Day of Women and Girls in Science was established in 2016 by the United Nations to raise awareness of the persistent gender gap in world research. In this context, the Spanish “11F” initiative emerged to amplify the messages of the day at the national level. In two special events last week, the ICN2 added its voice to both movements with a series of thought-provoking talks on the subject of gender.

Following an introduction from the ICN2 director, CSIC Prof. Pablo Ordejón, in which he reiterated the centre’s commitment to gender parity, senior researcher Dr Neus Domingo took the stage with a fast-paced overview of all things gender in science research today, from its “pinkification” as a (questionable) means of attracting more girls to science, to the subtle last ports of prejudice still left in selection and recommendation processes. She also took us to the beginnings of this gender divide in STEM, rooted in an education system and teaching models that, combined with social influences, can make girls feel less welcome and even less able to take on these subjects.

On stereotypes and ‘cement’ ceilings

Next we had a talk by IESE professor Núria Chinchilla, who made the distinction between the glass ceiling, imposed by society, ingrained cultural prejudices and other people, and the cement ceiling that women can sometimes impose on themselves in response to the same. She also talked about the importance of recognising that there are fundamental differences between men and women, between the way they look at and respond to the world around them. And rather than ignoring them in the name of equality, we should be devoting resources to understanding them better and adapting existing structures, existing roles and existing objectives to allow for this duality.

Sònia Estradé, lecturer at the Universitat de Barcelona and spokesperson of the Spanish Association of Women Researchers and Technologists (AMIT), then presented her vision of women in science. Echoing some of the ideas presented by both Núria and Neus, she spoke of the different ways women are perceived by society in general and in science in particular. She makes the observation that while male scientists are depicted in the press (by both male and female science journalists…) as experts, deep-thinkers and innovators, the female scientist’s merits and even agency in her own research are often passed over.

On the need to recognise other expressions of excellence

After a short coffee break, we reconvened for the part everybody was looking forward to: a round table with some of the ICN2’s very own women in science. Moderated by Dr Adriana I. Figueroa, the session brought together CSIC Prof. Laura Lechuga, CSIC scientist Dr. Mónica Lira-Cantú, Dr. Belén Ballesteros, CSIC scientist Dr María José Esplandiu and senior researcher Dr Neus Gómez Bastus, all of whom are leaders at the ICN2, whether with or without the title.

In this session, self-confidence, strength and having the courage of one’s convictions were underlined as necessary attributes for women in science; for all people, but especially for female scientists navigating a system that, if only by dint of having emerged within an imperfect society, was designed by and for men. The participants also spoke of the fundamental importance of family support, both from childhood, to spark (or at least not inadvertently stifle) the initial interest and passion for science, and then as adults to keep these fires burning.

Overall the debate pointed to the continued need to detect and challenge the gender stereotypes associated with science and the scientific career, as well as to explore new structures that allow for and recognise different modi operandi, leadership styles and expressions of excellence. For although the personal experiences reported were largely positive, there was some acknowledgement among the round table participants of on occasion having had to fight disproportionately to their male counterparts and even consciously adopt more typically masculine behaviours in order to rise through the ranks.

The pursuit of parity

As a final point, it is worth stating the obvious that the pursuit of equality and parity, in science and all spheres, is beneficial for both men and women. Just as there are differences between genders, there are differences between all people and a society that can recognise and embrace this is ultimately going to be stronger, more cohesive and more respectful – all of which are qualities to which the ICN2 aspires.

← EVENT: Celebrating Women in Science
The nanoscience of ferroelectric and ferromagnetic domains converges on Barcelona →