THESIS DEFENSE: Effect of flexoelectricity on the nano-mechanical properties of ferroelectrics 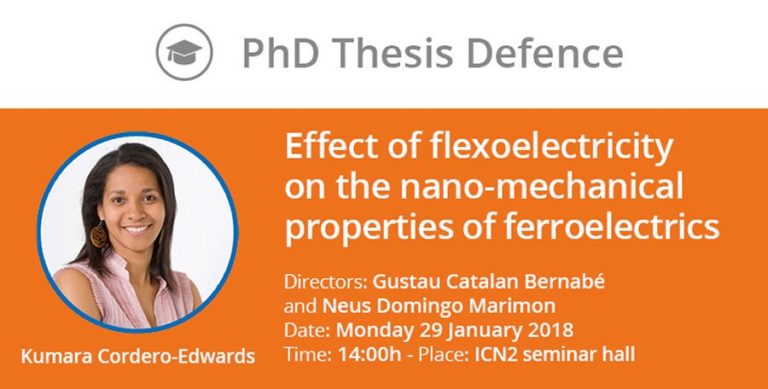 Short Abstract: Ferroelectric materials can present various electromechanical responses. These include electrostriction (strain proportional to the square of the electric field) piezoelectricity (polarization induced by a strain), and flexoelectricity (polarization induced by a strain gradient). Since flexoelectricity is proportional to the strain gradients, and these can grow in inverse proportion to the size, at the nanoscale flexoelectricity can be as big as or greater than piezoelectricity. The research developed in this thesis focuses on studying the interaction between these two properties in ferroelectrics, and specifically on how this interaction affects the mechanical properties of ferroelectrics.

Until now it has been believed that the mechanical properties are invariant with respect to space inversion, that is to say that measuring them on one side or on the opposite side of a crystal should not change their value, even when the material in question is non-centrosymmetric (piezoelectric or ferroelectric). However, this thesis shows that, in the presence of strain gradients, mechanical inversion symmetry breaks down: the mechanical response of ferroelectrics depends not just on the orientation but also on the sign of their polarization. This result represents a paradigm shift in the physics of solid state mechanics and fracture physics, and opens up new and interesting functional concepts such as mechanical reading of polarization.

← Strange but true: turning a material upside down can sometimes make it softer
EVENT: Celebrating Women in Science →