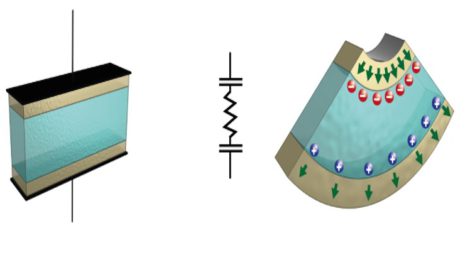 The winners of the 2016 GEFES Prize for the best thesis in Condensed Matter Physics developed in Spain have been recently announced. Dr Jackeline Narvaez Morales has won, ex aequo, the award for the best experimental thesis, for her investigation of flexoelectricity in single crystals. Her PhD was conducted at the ICN2 Oxide Nanoelectrics Group under the supervision of ICREA Research Professor Gustau Catalán and Dr Neus Domingo. The Specialized Group of Solid State Physics (GEFES), an organization of the Royal Spanish Society of Physics (RSEF), has recently announced the winners of the Prize for the best thesis in Physics of Condensed Matter developed in Spain. One of the two awarded researchers in the experimental research category is Dr Jackeline Narvaez Morales, who carried out her doctoral research and wrote her thesis at the ICN2. The directors of the thesis were ICREA Research Professor Gustau Catalán, head of the Oxide Nanoelectronics Group, and Dr Neus Domingo. The award ceremony will be held at the symposium organized by GEFES at the next RSEF biennial meeting in July 2017.

The thesis, defended by Dr Jackeline Narvaez Morales on February 29 of this year, was entitled Flexoelectricity in Single Crystals. Briefly, the ICN2 award-winning study deals with flexoelectricity, which consists on the generation of a voltage when a material is bent. This effect is present in all materials regardless of their crystal structure. In the doctoral dissertation, they studied bulk and surface flexoelectricity in dielectric and semiconductor single crystals. Both mechanisms are of the same order in ordinary dielectrics and, before this work, their respective contributions were considered indistinguishable one from another. The research in this thesis shows, for the first time, that it is possible to separate the bulk contribution from the surface one. Importantly, Dr Narvaez also discovered that this property, previously thought to be exclusive of insulating materials, is in fact also possible –and indeed much bigger- in semiconductors. This result, published in Nature, opens the exciting possibility of using semiconductor materials for electromechanical energy harvesting.

Dr Narvaez is currently working at the R&D department of Electricos Internacional in Bogotá, Colombia, which is also her country of origin. She is very excited about the news and says “I would like to thank everybody who helped me and supported me in every way during the doctorate. I love everybody. The success is the reflex of the love and passion that you put in the work.” Her supervisors are equally exultant; Prof. Catalán comments “This means a lot to everybody: for Jackeline it is a very important achievement that will surely help her career, and for ICN2 it signals the tremendous quality of the scientific education that young researchers can expect to get here. And yes, of course it is also a source of personal pride for us to see that our research is relevant and our students successful”.