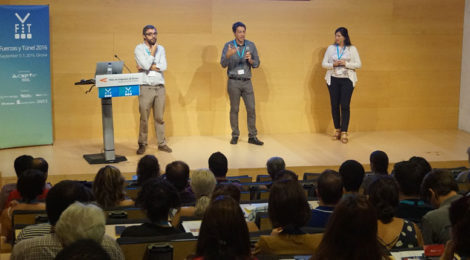 Fuerzas y Tunel 2016 (September 5-7, 2016), a congress gathering every two years the Spanish community working on scanning probe techniques, and the exhibition Visions of the NanoWorld (until September 29), bring nanoscience and nanotechnology to Girona (Spain). Different dissemination events around the congress offer a didactic and attractive view of the research performed at ICN2 and the nanoscale.

Simple but fascinating tools like scanning probe microscopes (SPM) have enabled the visualization and manipulation of matter at the atomic scale. The knowledge achieved with this technology brought nanoscience and nanotechnology to the forefront of research and industry. To celebrate the 30th anniversary of the invention of these microscopes, Girona hosts the Fuerzas y Tunnel Congress 2016 (5-7 September) sponsored by ICN2.

The conference organizers have taken the opportunity to share at the Casa de Cultura de Girona the scientific and aesthetic potential of nanoscience. Visions of the NanoWorld is a program of dissemination activities around the Fuerzas y Tunel 2016 Congress including an informative exhibition about nanoscience and its impact on our life through nanotechnology, an image contest awarding the beauty of scientific pictures, and two informative talks featuring top international researchers in Catalonia. The outreach activities have been designed in collaboration with the ICN2 Marketing and Communication Department.

The exhibition will be open at the Casa de Cultura until September 29. It was formally inaugurated today followed by a talk entitled “Microscopes: hands and eyes of scientists”, offered by Prof. Miquel Salmeron, who was director of the Materials Science Division at Lawrence Berkeley National Laboratory, University of California (2008 – 2012) and is still linked to the science developed in Catalonia being a member of the Board of Trustees of the Barcelona Institute of Science and Technology (BIST) and of the ICN2 Scientific Advisory Board. Prof. Pablo Ordejón, ICN2 Director, presented the event.

La Casa de la Cultura will host the second informative talk (September 22, at 19: 30h), by three ICN2 researchers: Dr Neus Domingo, ICREA Prof Aitor Mugarza and Dr Albert Verdaguer. All three doctors are experts in physics and the use of SPM microscopes, which allow us to play with atoms as if they were chess pieces. After coordinating the Fuerzas y Tunnel 2016 Congress and the related outreach activities, these researchers will offer their direct, plain and enthusiastic point of view.