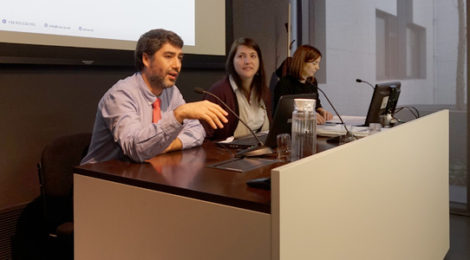 Lluis Rovira, Director of the CERCA Institution, chaired the event that introduced the result of two years of diagnosis and discussion within the ICN2 Equal Opportunities Committee. The Plan presented on february first seeks to ensure that ICN2 offers equal opportunities for men and women and to promote the development of women in the scientific career.

The Equal Opportunities and Diversity Management Plan at ICN2was presented on february first in an event chaired by the Director of the CERCA Institution, Lluis Rovira. The mission of the Plan is to provide equal opportunities for men and women and promote the development of women in the scientific career.

Lluis Rovira underlined the fact that, although there is a balance in the number of young men and women starting their scientific career, the senior positions are mostly occupied by men. CERCA Institution set up a committee, which met in the second half of 2013 and early 2014, to discuss and design the CERCA Equal Opportunities and Diversity Management Plan. This plan is intended as a guideline for the CERCA centres, each of which will adapt it and implement any measures needed.

Neus Domingo, Senior Researcher at the ICN2 Oxide Nanoelectronics Group, introduced the objectives and scope of the Plan. She also summarized the work performed by the Equal Opportunities Committee, which was created in 2014 to start an open debate about equality and diversity issues within ICN2. The Committee is formed by Pablo Ordejón, Director of ICN2, Lluís Bellafont, General Manager of ICN2, Rocío Pérez, Head of Human Resources, Mónica Lira, Group Leader who participated in the initial meetings of the Committee, Neus Domingo, Senior Researcher, and Marta González, Project Manager of the ICN2 Severo Ochoa Program. After producing and presenting the Plan, this Committee will now monitor and update it and will work in the development of proposals for future actions for continuous improvement.

Rocío Pérez, Head of the ICN2 Human Resources Department, explained the main areas of action included in the Plan: Human Resources (Access and selection processes, Internal Protocols); Training and Awareness; and, Language and Communication. Her presentation also included conclusions about the results of an internal survey and the analysis of the distribution of the staff.

The event ended with the presentation of a number of actions to be implemented in the different areas included in the Plan. It also included the announcement of a section devoted to Women in Science that will be included in the new ICN2 website to be presented in the close future. Some of the main challenges for the future are designing and feeding robust databases to study the institutional equality indicators and allocating the necessary resources to deploy important actions such as creating a scientific career development counselling programme.

← Mad for Science 2016 was launched in a massive event
ICN2 combines science and art in Girona: Fuerzas y Túnel 2016 →