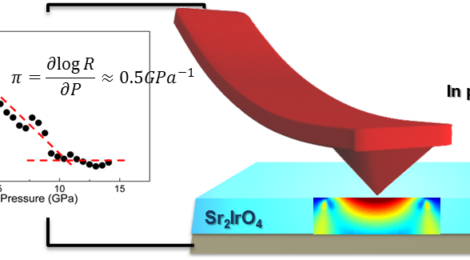 ICN2 Oxide Nanoelectronics Group obtains conductivity values for stroncium iridate 250 times higher than in normal conditions, just pressing with nanometric needles. The results, published in Nanoscale, were obtained thanks to the use of the atomic force microscope (AFM) showing that the material could become a good candidate for future applications in sensors and electronics.

Researchers from the ICN2 have measured, at room temperature, the highest values of piezoresistivity ever detected in an electroceramic material, overcoming the registers for materials such as silicon nanowires or graphene. Moreover, it was measured with a simple technique that avoids using complex equipment to control pressure. The research has been conducted by Oxide Nanoelectronics Group, led by Prof ICREA Gustau Catalan. Dr Neus Domingo is the first signer of the article published in Nanoscale and her intervention has been essential for the development of the research.

Piezoresistivity happens when certain materials change their electric conductivity once submitted to a pressure deforming them. This is due to the fact that isolator and semiconductor materials have very special electrical characteristics which result in bands with different proprieties: the valence band, where electrons are ‘parked’, and the conduction band, where the electric current flows. These bands are separated by an energy gap; when the gap is thin, the number of electrons in the conduction band is higher and, consequently, the electric conductivity is higher too.

When pressure is applied on certain semiconductor materials, the band gap which separates the conduction band and the valence band is modified. This allows electrons jump to the conduction band consequently decreasing the electric resistance of the material. In other words, when the material is pressed, there is better electricity conduction. This fact leads to a wide range of possible applications, from pressure sensors to microelectronic transistors where the current is controlled by pressure instead of voltage.

At the ICN2 laboratories, Prof. Catalan’s Group has measured a giant piezoresistivity in a ceramic material, stroncium iridate (Sr2IrO4). The measures were made with an atomic force microscope (AFM), a device that uses nanoscopically sharpened needles that allow to press the material and to quantify its conductivity at the same time. In fact, it is a new and imaginative way to use this equipment because it is the first time that the AFM needle is used to measure a material’s piezoresistivity.

AFM needle is so small that a minuscule force becomes in a high pressure value. Less than 1mg of force (approximately an ant’s weight) applied over a nanoscopic needle is converted to a pressure value of over 100 tons (20 elephant’s weight) per square centimeter. In fact, the pressure is so high (to 10GPa) that diamond tips had to be used to prevent the needle from crushing.

With this pressure levels, researchers have obtained conductivity values for Sr2IrO4 250 times higher than in normal conditions. It stands out that, despite applying deformations many times (over 500), the sample has not suffered any damage. Moreover, the piezoresistivity has been measured at room temperature. In conclusion, this semiconductor could be a good candidate for future applications in sensors, new kinds of transistors and other specialized electronic devices. However, iridium is a scarce element in our planet, so scientists are looking for alternative materials.

The samples for this research have been produced in the University of California (USA) and the study has taken place in the ICN2 in collaboration with the Institute of Materials Science of Barcelona (ICMAB). The funding for the project has been obtained from Prof Catalan European Research Council (ERC) Consolidator Grant and a Project from Plan Nacional de Excelencia Investigadora.